Dona Paula is a secluded bay where the two major rivers of Goa, Mandovi and Zuari meet the Arabian sea. Initially, the village, Oddavell, was named Dona Paula after the historical figure, Dona Paula de Menezes. It is one of the most popular and romanticised place in Goa with a beautiful view. There are numerous collections of ghost stories about Dona Paula. On moonlit nights at the stroke of midnight, she rises from the sea wearing a string of pearls and nothing else. Various legends are associated with this story. 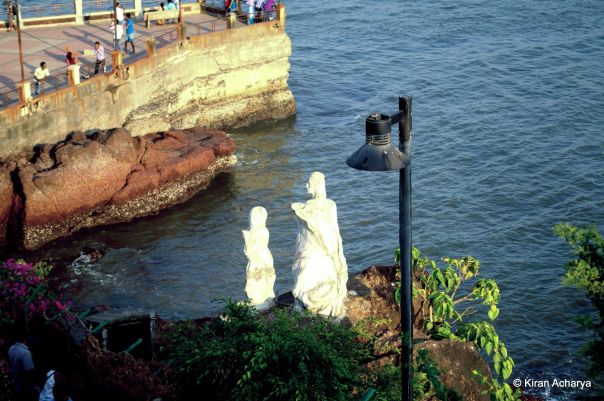 -According to one of the legends, she was a lady in waiting of the Portuguese Governor generals wife and the Governor was enamoured of her. The Governor’s enraged wife stripped her except for the pearl necklace (which was a gift from her unfaithful husband), bound her and pushed her from the cliff of the then, Oddavell.
-Another popular legend describes Dona Paula, as a Portuguese viceroy’s daughter who fell in love with a local fisherman. This aroused the racist feelings and anger of the Portuguese and she hurled herself over the cliff.
-Yet, one legend describes her as Dona who married Paulo, a fisherman. One day, he ventured to the sea and never returned. The dutiful wife waited for him at the cliff for the rest of her life and got turned into stone.

-Gasper Dias, a nobleman, is also considered one of her lovers. It is believed that he betrayed her and married someone else. The heartbroken Dona Paula jumped from the cliff. Her ghost appears at night to look for the nobleman and exact her revenge.
-Dona Paula de Menezes was a Portuguese viceroy’s daughter. She married in 1656 and came to be known as Dona Paula Menezes e Souto Maior. She was a woman of charity and is supposed to have done a lot of work for the betterment of the villagers. So, after her death, the villagers renamed the village to Dona Paula.

The myths have contributed to the popularity of the beach and is one of the reasons why the beach is so crowded in the evenings though that isn’t the only reason. Dona Paula is one of the most beautiful, pristine beaches of Goa with its natural beauty. It is an ideal spot for sun bathing. It offers a fine view of Marmagoa harbour. It is also a treat for adventure lovers as it will give them a chance to indulge in water sports in clear waters.

7 thoughts on “The legend of Dona Paula”